In 2017, I wanted to be a fast typist, so I practiced typing a lot. Then one day I started feeling pain in my finger joints when I type. Unfortunately, it never went away from that point onward.

Among many ways to manage this, I try to type less. This means using my voice more. And hence I started the vx project.

This project began as a CLI application vxcli. Then an Electron application vxtron. Finally, the vx Chrome extension is its current form, is what I use to type on a day-to-day basis.

Get the Chrome extension https://chrome.google.com/webstore/detail/vx/obopnfigmanifpiojfhebcegjepgaiif

Here’s the problem: I am not a native speaker. A lot of times the computer would misrecognize what I said. And each time I had to hit the undo button.

This is me struggling to voice-type “Here’s the problem” in the paragraph above… ugh!

macOS’s Dictation also seems to have a few problems with rich text fields and web applications.

# Maybe I can do something to solve this…

I had an idea. Why not make computer just listen to me, and then copy what I said to the clipboard? Don't try to be smart by typing into the fields directly.

…with the plan in mind, I then got to work.

vxcli is a simple command line application written in Node.js. To run it I just type vx into the terminal.

Speech recognition is done by the Google Cloud’s Speech-To-Text API (opens new window). The accuracy is very high, but it’s also quite expensive.

The result is so great, it led me to pursue this project further. Having to run a command in the terminal every time I want to write something… that’s just isn’t quite convenient!

vxtron is, you guessed it, an Electron application.

Now, instead of running a command, I can just run vxtron and leave it in the background. It registers a global hotkey which I can press to make it start/stop listening.

I developed it live on stream (Thai language).

I also made it about to listen to 2 different languages (a hotkey for each language). I also had my sister try out vxtron. She told me that because of it she can input text almost twice as fast.

It was designed for macOS. But I also had a Chromebook, and Chromebooks don’t run Electron apps…

Being a Chrome extension, it works on macOS, Windows, Linux, as well as Chrome OS.

In April 2020, I polished the extension and published it to the Chrome Web Store. 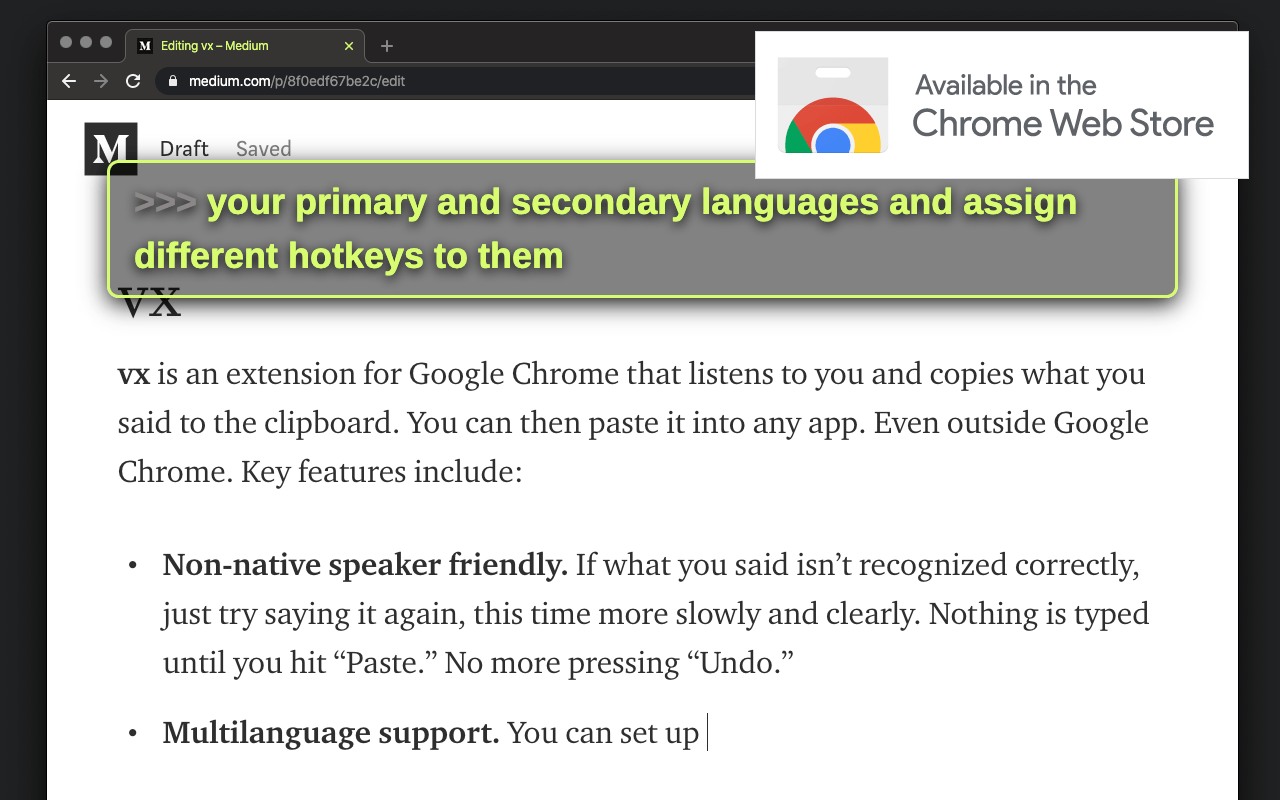